Lately, the internet has found itself in an unusual position of ranting at Google, like an old man yelling at a cloud. Marketing has a platform problem, and we all seem to be pointing it out all at once.

Jason Fried, Founder and CEO at Basecamp, made some waves when he scoffed publicly about Google selling trademarked brand names to the highest bidder, thus forcing them to take out ads against their own brand name.

When Google puts 4 paid ads ahead of the first organic result for your own brand name, you’re forced to pay up if you want to be found. It’s a shakedown. It’s ransom. But at least we can have fun with it. Search for Basecamp and you may see this attached ad. pic.twitter.com/c0oYaBuahL

This is not a new practice or problem. At CoSchedule we spend at least $20,000 per month on such nonsense and have for years.

Meanwhile, Rand Fishkin at Sparktoro, released some fascinating data about how Google search has changed over the last few years. TL;DR: Clickthroughs on organic searches are declining in favor of more paid ad clicks or searches that result in no click at all. 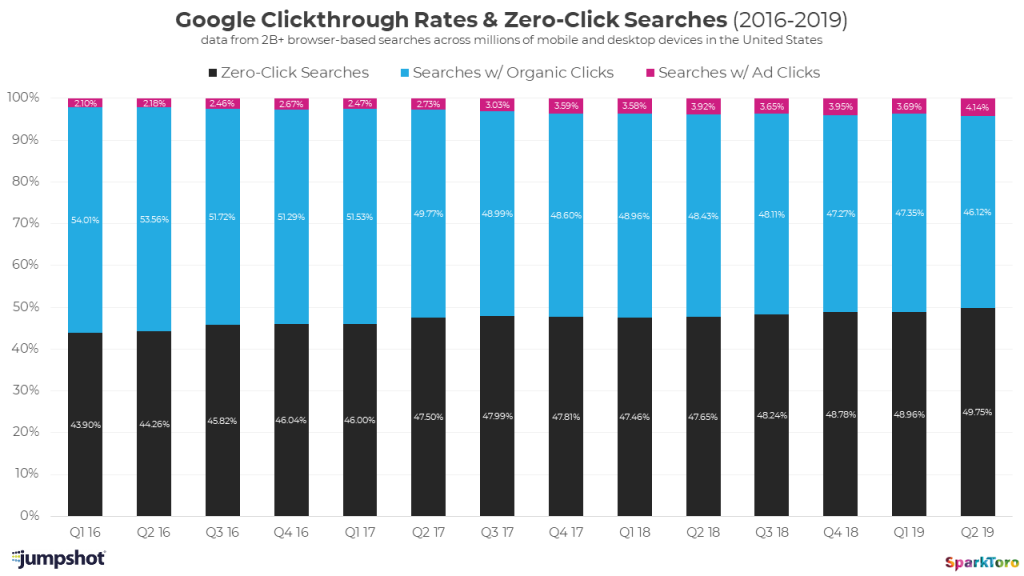 Social media isn’t without its drama either.

Facebook has come right out and said that with respect to the content posted from business pages “people will see less of this type of content in their News Feed.” Rumors and speculation also continue to surround Facebook’s devaluing of news feed content posted by third party providers.

For many marketers, paying to play on Facebook is the new normal.

Twitter is also changing. They have recently become more transparent about the content being posted to their network by third-party providers, and have started to roll out their own version of the prioritized news feed.

We’ve seen this movie before Twitter, we know how it ends.

So, what’s the conclusion here?

Is marketing is getting harder?

It’s definitely changing, and we’d be foolish to expect anything else.

I think that the bigger lesson here is that digital marketing in 2019 has a platform problem that we can’t ignore. When we build things on other people’s networks, they will always let us down… eventually.

Marketing in 2019 has a platform problem that we can’t ignore. When we build things on other people’s networks, they will always let us down… eventually.

Invest In Audience Building, Not Marketing

Often, we think of marketing as a singular activity late in the product launch-cycle. We think of the product, we make the product, and then we market that product to our target customers.

I think it’s better to think of it as audience building, and that needs to start long before you launch.

However, given the above conversation about the woes of building an audience on other people’s networks, you may want to find a way to build and own your own audience.

For my money, that still comes down to your website (blog or otherwise) and an email marketing list.

You’ll notice that email marketing wasn’t mentioned above as a marketing channel that is losing its effectiveness. Surprisingly, it has weathered the storm really well.

If you aren’t list building, you aren’t audience building, and now is as good a time as any to focus your efforts there.

If you aren’t list building, you aren’t audience building, and now is as good a time as any to focus your efforts there.

Apple is a long-standing content distributor but has now decided to become a content creator as well.

Disney and NBC are classic content creators who are now becoming their own distributors.

The message here is quite obvious. It’s not good enough to simply be a content creator anymore. You will also need to be your own distributor.

It’s not good enough to simply be a content creator anymore. You will also need to be your own distributor.

You need to be creating your own content and investing in learning how to distribute it to your audience.

Connect With Your Audience Where They Are

Facebook, Twitter, and Google all have their woes, but that doesn’t mean you need to avoid them altogether.

You still need to go wherever your audience goes, just don’t build your house there.

Start thinking of these channels as inbound superhighways to your own content, and use them to build your audience.

Over time, you will develop your own network effect, and your audience will learn to build itself.

In short, when comes to other networks; meet your audience there. Interact with them. Share your content. Build trust.

Then, build an email list when they visit your site so Mark Zuckerberg doesn’t end up sitting right between you and your customer.

Garrett Moon is the author of the 10x Marketing Formula and CEO and co-founder of CoSchedule, the web's most popular marketing calendar and the fastest growing startup in North Dakota. You can follow Garrett on his blog, on LinkedIn, or on Twitter. View more posts

How Should You Measure Your Marketing Team Talent?

Last week, an entrepreneur asked me a question that you may have asked yourself. They wanted to know, “how do I measure my marketing team talent?” It is not uncommon for entrepreneurs to struggle with marketing questions. Understanding whether or… END_OF_DOCUMENT_TOKEN_TO_BE_REPLACED
Previous post

The phrase product-market fit is often used to define the moment that a startup reaches market relevance. Most of the time, this means that the product itself satisfies the problem that it’s target customers are experiencing. Unfortunately, I think it’s… END_OF_DOCUMENT_TOKEN_TO_BE_REPLACED